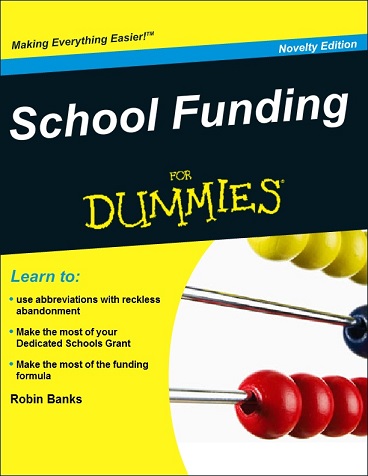 Last time I checked, ‘School funding – for Dummies’ was not an Amazon best seller. Truth is, I didn’t check. Apart from school leaders and school business managers, who has an interest in school funding (not even all school leaders are interested, that is what they have school business managers for.) The Dummies guide will arguably, never be written, but that does not stop me from feeling that I should have at the very least have a handle on the basics of how our school is funded.

The rationale was to make school funding arrangements simpler and fairer, to give school leaders more control over how they spend their budget, to introduce more transparent school and college funding arrangements. To make sure school and college budgets are set on time and are predictable and to make sure funding always reaches the pupils that need it most. Finally to announce details of the national funding formula by Easter 2014? So we are expecting a national funding formula?

Most were familiar, some like the “Schools Block” required a little further Googling. The total DSG is split into three separate blocks, a schools block which is intended to fund individual school budgets, an early years block which funds pre-school education in all settings, and a high needs block which funds special schools and all non-mainstream educational functions (including top ups to schools for individual pupils with additional or special educational requirements). Schools Block is based on pupil numbers as recorded on October 2013 School Census, multiplied by a per pupil unit of funding.

The 2013-14 reforms, were reported to have lead to local authorities, working with their Schools Forums, to develop new local formulae, using simplified and consistent formula factors. This would appear, to the lay-person a positive step.

This was then followed by the February 2014 review that noted “to what extent we needed to make small changes in 2014-15 in order to move closer to a national funding formula.”

So, are we, or are we not, moving towards a national funding formula? Towards a goal of a pupil-led funding system or consistent basic entitlement per pupil?

Findings from the Review and Approach for 2014-15

All but two local authorities allocated 80% or more of their delegated DSG. A minimum threshold is supported. A minimum of 80% of delegated schools block funding is to be allocated through an appropriate and locally determined combination of the pupil-led factors. (but not yet a a national funding formula).

Deprivation – local authorities have to ensure that deprived pupils attracted additional funding, in addition to the Pupil Premium. From reading the policy, it is safe to safe that this is localised and complicated but it is clear that more funding will be available. It is needed, 37.9% of pupils who qualified for free school meals achieved 5EM A*-C, compared with 64.6% of pupils who do not qualify in 2013.

Sparsity – a factor which measures the distance pupils live from their second nearest  school.  An optional sparsity factor will be introduced in 2014-15.

Pupil Mobility and Service Children – starting in 2014-15, a 10% threshold will be applied to the mobility factor, so that it will only support schools which experience a significant change in their pupil numbers.

Lump Sum Funding – in 2013-14 local authorities were able to provide a single optional lump sum to all schools up to a maximum of £200,000. That has been reduced to £175,000, another move towards a pupil-led funding system (though there is more flexibility in the policy).

Looked After Children – In 2014-15 local authorities have to use a single one day or more measure for both primary and secondary.

High Needs Funding – I needed to research further. In simple terms it is funding designed to support a continuum of provision for pupils and students with special educational needs (SEN), learning difficulties and disabilities, from their early years to age 25. As far as I understand it, the DfE had not ywt confirmed how they will fund growth in the High Needs Block at this point.

Many academies that initially receive their budgets based on estimated pupil numbers have their funding adjusted to reflect in-year pupil counts through a process called the pupil number adjustment. In line with principles of funding simplification overall, the DfE intended to consider introducing a simplified method for calculating these adjustments to 2013/14 budgets. More research needed here.

What happens if estimated pupil numbers are significantly lower or higher?

The overall schools budget will stay at the same level on a per pupil basis before the addition of the Pupil Premium, the actual level of each school’s individual budget will vary.

To protect schools from significant budget reductions, the Minimum Funding Guarantee (MFG) will ensure that no school sees more than a 1.5% per pupil reduction in 2014-15 budgets (excluding sixth form funding in mainstream schools) compared to 2013-14 and before the Pupil Premium is added. This is the same methodology as for 2013-14. The Pupil Premium level of funding for 2014-15 was detailed in the December report to Schools Forum, as follows:

The original four factors David Law outlined, was extended to five  in the the Fairer schools funding in 2015-16, which remains open for response until April 30th.

So that brings the funding up to date. Not quite a Dummies guide however writing this summary has at least helped me make some sense of the funding fog.