Confidence, reassurance, familiarity (with the environment, with exam rubrics and with questions), reading skills (decoding questions, responding to command words, identifying keywords) writing/responding skills, myth busting, what ever the benefit, walking pupils through an exam paper has benefit. This years vogue (2015), the “walking, talking mock,” (WTM). In fact the blog post stats would suggest it is going to be popular this year 2016 too.

The Guardian described it as “a new initiative intended to boost students” exam technique,” it is new, but it is merely examination preparation with a heavy focus on process. There are many examples of walking, talking mocks online, and marking, the performance outcome. I say performance, as it is not, at the point of completing the WTM, a learnt exam strategy, and it is not THE exam, [the author suggests a sense of worry and concern in his staccato voice]. Hence I am not too sure how transferable a WTM grade is, to an actual exam grade. (The 2015 question level analysis should more consistency. Few rogue question means and improved student attainment.)

As with many exam techniques, my browsing suggests that WTM were originally conceived as a method for supporting the much targeted, C/D borderline pupils. It would be far to confirm that a WTM is a more functional and purposeful use of a pupils time, rather than allowing these pupils to flounder in the second half of the exam, creating amateurish spiragraphs, or worse, leaving their marks on the exam desks as opposed their answer sheets. Our decision, to talk the whole year group through the experience one question at a time.

You can find plenty of script templates and descriptions of the process online (especially iGCSE, English given the relatively early exam date) perhaps sharing our incremental success and observations might be more insightful.

Having already completed and fed back to pupils on their Performance Week mocks exams at the end of Term 4, we needed to explain / justify to the pupils the addition of “another exam.” In the Year 11 assembly we outlined our plans and our pupils accepted our sincerity, if they were celebrating the opportunity.

We created a suitable exam climate though next time, we intend to follow the usually procedures for an exam as far as possible. We had the exam hall laid out, no seating plan and only had 4 adults in the exam hall; the WTM lead, a member of SLT, two invigilating staff. Our Head of English was brilliant, like an experienced tour guide she pointed the famous landmarks and highlighted the cultural subtleties to our exam tourists with real aplomb. Bob, David and I provided the muscle.

We did split the extended and core pupils. A separate more considerate approach for some of our most vulnerable learners.

Despite the fact we working the graveyard shift (Friday PM) – the pupils focus was commendable. We were very proud of them.

Exam preparation starts with equipment. The WTM was another opportunity to underline this key fact.

Highlighters are a key exam kit.

In the WTM environment, pupils were significantly more likely to ask for help or clarification. Even after emphasising and clarifying the “do not” or “only use your own words” or any bold or italicised exam paper instructions, our pupils still questioned the exam paper instructions we had just explained. Reassurance or truly not understanding?

Some pupils still find writing and/or highlighting on the exam paper an unusual activity? A good technique to introduce,

After reinforcing the response process – the skill of “prioritising” highlighted words / phrases, to then structure a written response, for our pupils still needs to be further reinforcement.

A good few pupils found working to the proscribed time frames challenging. This is, of course, for those pupils, their exam challenges.

The point above was partly addressed by “time-saving” techniques, identifying responses that require little or no explanation.

Having a microphone is essential. Slow done the pace of your explanation.

Keep reinforcement of the exam techniques to a minimum, shorten the instruction where ever possible.

The ability to “move-on” stuck pupils in the WTM was valuable.

The pupils at Chris Edward school summed it nicely.

Interest, WTMs are appearing now, on Youtube, and we are looking at securing more Ipevo desktop cameras for more live modelling (exam and more) in our classes. If you looking for a silent movie, or just a “walking mock,” see John Tomsett’s post on “What really works when preparing students for their examinations.”

PS Today was the day. iGCSE exam day. The students seemed rather calm for the big event. The day was rounded off in the best possible way…

Dear Ms O’Dell We just wanted to drop you a quick note to let you know that the session you prepared for the year 11’s last Friday really gave students name confidence going into today’s exam.  He did lots of practice over the weekend and said more that once how much your session had helped him to understand what he needed to do going into the exam. We have always been impressed by the support students name has had from the English department and wanted to thank you for the session you ran, which will hopefully have helped students name to reach or even exceed his target grade. Kind regards.

A week after the History walkthrough, more evidence of the impact. 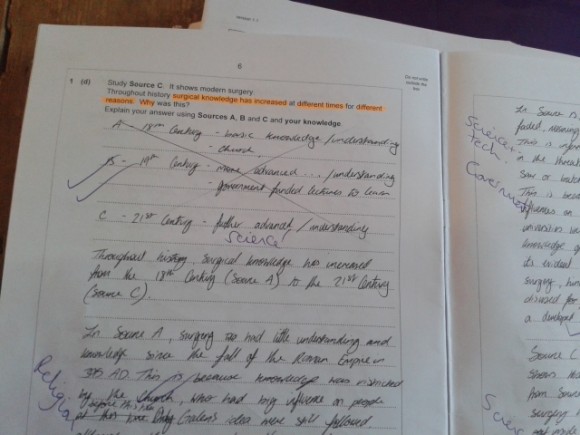 I have been marking one of my year 11 student’s Medicine Through Time exam paper that they went away and did over the weekend following the walkthrough.  She has used what was suggested to her in the walkthrough about highlighting and planning, for a similar factors question that was also in Medicine and has improved her ability to answer this type of question by 1-2 marks. Overall, she has improved from a C+ in her mock medicine exam to a solid B grade. The longer answer factor style questions have been improved which has resulted in this boost in grades.

I am hoping that this will be seen with other students as they hand in more work to mark!